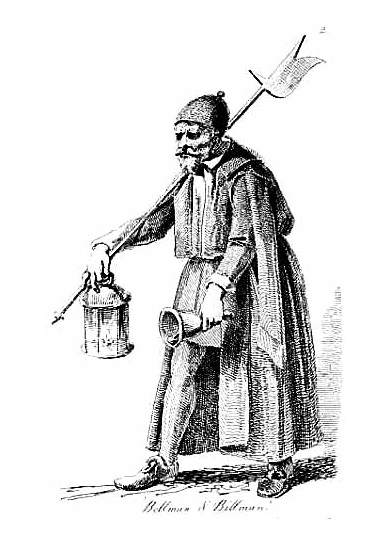 I saw this picture in a copy of

OR,
ANECDOTES OF
ITINERANT TRADERS
THROUGH THE STREETS OF
LONDON,
IN ANCIENT AND MODERN TIMES.

London:
J. B. NICHOLS AND SON.

The bellman/billman (the bill being the long hooked stick used to pull down thatch in the event of a fire) pictured is a copy that Smith made of an earlier medieval print.  According to the book (which itself quotes ‘honest John Stowe”s History of London), men and women with this role were wearing a rudimentary uniform as early as the 1600s, “every one had a strawne hat, with a badge painted.”