As a teenager in North London I enjoyed performing in plays at school and our local Amateur Dramatics group. I remember telling our careers teacher that I wanted to be an actor but he was totally dismissive of that idea and told me I should study for a proper job. I got a part time job at the old Wembley Stadium as a tour guide and worked there for four years. This led on to a brief stint doing the same thing at Lord’s Cricket Ground, but then I got a sensible job and then went to University.

After that I moved to the Royal Borough in 1996 where I was employed at Nfer-Nelson in Oxford Road East, Windsor.

Around this time I met my wife, Nicola, who I then married in 2004 at Windsor Guildhall. Our wedding reception was at the York Club in the Great Park.

Around 2005, I started sharing my love and knowledge of Windsor by doing occasional guided tours of Windsor.

I was also digging with the Windsor and Wraysbury Archaeology Group  and later worked with the Museum staff to conserve the finds for posterity.

This led to me volunteering as a steward at the Windsor and Royal Borough Museum, located at Windsor Guildhall, and eventually to applying for the role of Town Crier.

After a process of application, interviews and public cry offs, I was notified on 5th November 2012 that I had been successful and then spent a month getting the livery created.

My first official cry was on 8th December 2012 when in the morning I was at Windsor Guildhall opening the ‘medieval merriment’ fun day.

The same evening I performed my first cry in Maidenhead when I invited the Deputy Mayor to cut a ribbon to open the refurbished Bell Pub (95-97 King Street).

When not in my role as Town Crier for the Borough, my wife and I are both busy creating websites for local businesses.

The position of RBWM Town Crier is a voluntary role which includes reading proclamations, attending civic functions and helping promote the Borough.  However, I can also be booked for private work such as giving talks on my role and the history of the Borough, making proclamations at weddings, opening events or even delivering a special birthday message.

I am the first official town crier in the Royal Borough of Windsor and Maidenhead for almost a century.  The last town crier of Windsor was delivering proclamations in the 1890s.  Maidenhead’s last crier was Mark James Taylor who continued town crying until the 1920s.  It is Mr Taylor’s original bell (recently refurbished by the Whitechapel Bell Foundry) that residents and visitors will hear resounding around the Borough. 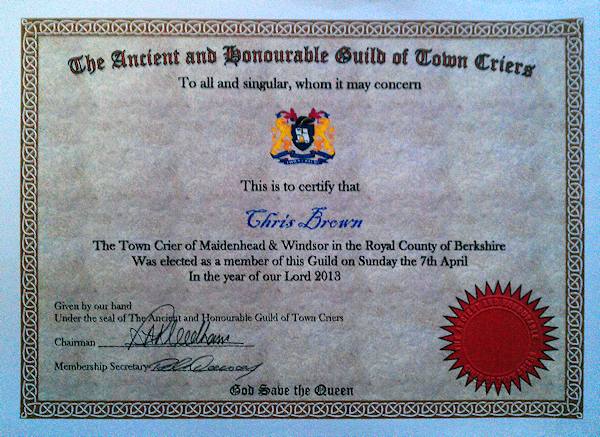 Proud to be a member of the Ancient and Honourable Guild of Town Criers.

Where will you see and hear me?

The Royal Borough covers a large area but over time I hope to get to all towns and villages to deliver my cries.  Keep an eye out for me in:

Radio 2 fans may recognise my voice too. On the day of Harry and Megan’s wedding in May 2018 I featured prominently in the live coverage of the event on Chris Evan’s show, for which I owe Chris and the team my huge thanks. For a whole year after that  an audio clip of me calling ‘Oyez, Oyez, Oyez’ was repeated daily on the Breakfast Show.