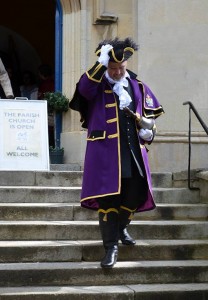 Since each town crier’s clothing is unique the word ‘uniform’ might not be appropriate, so I will talk about the town crier’s livery.

In the UK most criers opt for a livery of boots or buckled shoes, breeches, a waistcoat, greatcoat and a cockaded tricorn hat.

This is basically the standard European dressing style that ran throughout the eighteenth century (and a little way either side of it). That most town criers opt for a red coat in the UK is a nod to the fact that so many criers in the past were ex soldiers.

The town crier has to be a visible presence as well as an auditory presence, hence the feathers in the hat and extravagant use of braiding on their liveries.  The Ancient and Honourable Guild of Town Criers meet regularly for cry-off competitions and ‘best dressed’ is always a fiercely fought side of the competition.

Lets look at each item in more detail.

A tricorn hat was worn as both civilian dress and as part of military and uniforms throughout the eighteenth century. It evolved from a broad-brimed round hat worn by Spanish soldiers. By binding the brim in three places the triangular shape was achieved.

Town ciers today choose whatever colour plumes they want in order to make their liveries as ‘outstanding’ as possible. Feathers are generally Ostritch or Maribou Stork but there are exceptions.

It is said that town criers have feathers to represent the quill pen that used to be used to write the proclamations.  Effectively, we are wearing feathers to show the world that we can read and write.

Most criers also apply gold or silver braid to trim their hats. Again, the specifics vary from one town crier to the next. Braiding or military lace has been a common addition to hats for centuries.

Some town criers decide for a more modern basis to their regalia and go for a top hat instead. Toppers are wonderful hats and certainly stand out from the crowd. However there is something a little more sober about a top hat compared to a tricorn, so I think a tricorn is the hat for me. Perhaps in future years I will get myself an alternate livery in a Victorian style so that I can alter between hats depending on my mood.

In 2019 when we held a national Town Crier Competition in Windsor I swapped my tricorn for a white pith helmet which reflected the sun keeping me a lot cooler on what turned out to be the hottest day of the year. 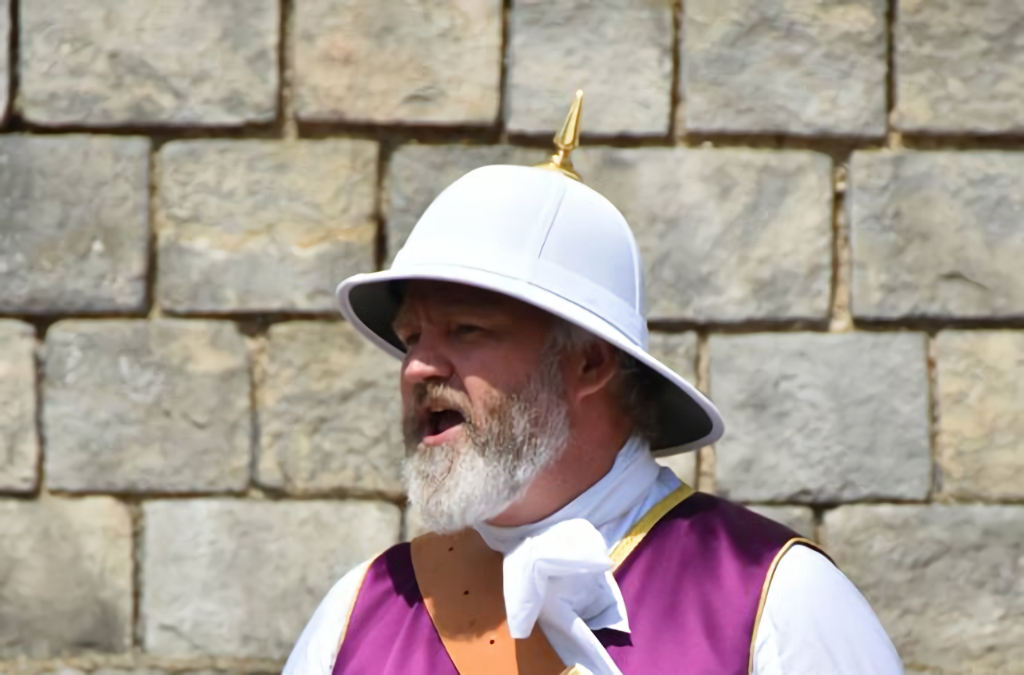 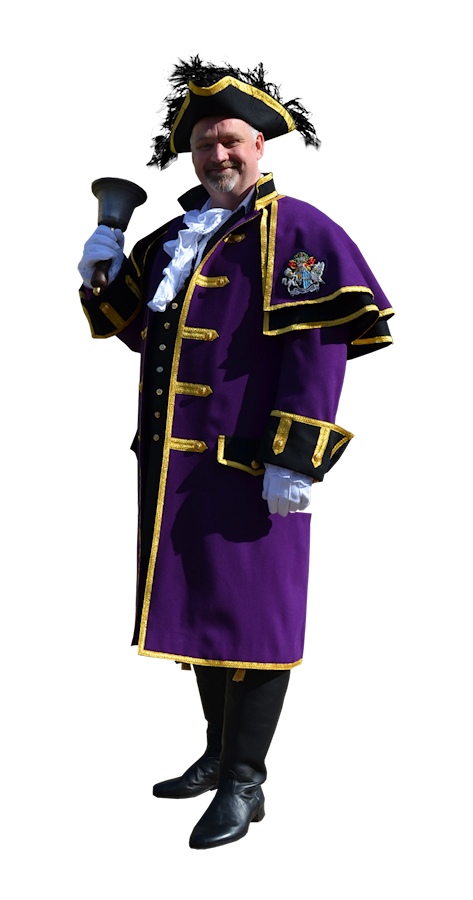 Many town criers opt for a coat similar in style to the one shown here. It is a great coat and certainly stands out from the crowd. It is based on real designs of an eighteenth century Gentlemen’s great coat from between  from 1740-1770 and was a practical warm article of clothing.

The colours, sizes and exact shape of all the trim are what makes one town crier’s costume different from the next.

There are a few photos from December 2012 where I am dressed in a black robe. This was a temporary costume borrowed for the month while the official costume was being designed and made.

My coat has a short cape and on it you can see the coat of arms of the Royal Borough. Many criers put their town crest (or crests) on their liveries plus guild crests, military honours and any other thing they like if they feel it is suitable.

I am a member of the Ancient and Honourable Guild of Town Criers, so could add their crest if I wanted, but for the moment I am happy with the livery as it is.

Waistcoats were an essential item in a gentleman’s wardrobe in the 18th century and beyond. Some criers opt for plain waistcoats while others go for highly decorated examples. All manner of different styles, shapes and colours have been tried over the years, so again, there is no ‘proper’ waistcoat to base a costume on. In short, anything goes.

Breeches are trousers which usually stop just below the knee and were commonly worn from the later sixteenth century to the early nineteenth century by men of all classes (although in France they became associated with aristocracy and therefore fell from popularity following the revolution.)

Breeches may have buttons, drawstrings or buckles at the bottom where they tighten below the knee and will have either a fly front or a more traditional ‘fall front’.

I wear breeches when also wearing buckled shoes, but when I have my boots on I wear long trousers tucked in.

A scroll is a key component in the town crier’s livery.

In winter I pull on a pair of reproduction 18th century Hessian Boots.  I think they look terrific and certainly feel great.

In summer and particularly in hot weather I switch to a pair of authentic handmade buckled shoes.  There was no left or right when they were first made, but my feet are gradually shaping them each time they are worn. The other feature of these shoes is that the leather is ‘inside out’ with the softer side facing up as was a common option up to the late eighteenth century.

I have a leather baldrick which hangs over one shoulder and allows me to holster the bell. It has a large buckle and brass badge featuring the Royal Borough crest near the belt’s tip.

White gloves are a key part of the livery on special occasions, but they are a bit of a faff so I often leave them at home.

I bought myself a round leather water bottle which occasionally gets a bot of use on sunny days. It looks so much more in keeping with the rest of the livery than a modern plastic bottle and it is better for the environment too.

There is also a plain black armband (three and a quarter inches wide) to be worn on the left arm for mourning.