The word Oyez  does not mean ‘oh yes’ but comes from the French ouïr, which means “to hear”. So it could be translated as simply ‘Listen’.

The correct pronunciation is with a silent ‘z’ . Phoentically it is written as (/ˈoʊjeɪ/) but is most clearly understood when written as ‘Oh, Yay’.

From Medieval times, the town crier has been a primary means of news communication with the townsfolk. Royal proclamations, local bylaws, market days, adverts and newsworthy events were all proclaimed by the town crier.

The crier generally carries a hand bell to attract attention, leading to the crier’s other historical name of the bellman (although some criers have also attracted attention with drums and horns).  The Bayeux tapestry features two bellmen accompanying the invading armies of William of Normandy.

The earliest named criers in English history are Edmund Ikelyng and Thomas Thorne who were both criers in London in 1395.

The tradition of delivering proclamations in rhyme dates back at least as far as the sixteenth century. However, not all criers did this so modern criers have the option.

It is believed that one reason for the lack of fatalities during the Great Fire of London in 1666 was the key role played by the London’s town criers in spreading the word about the disaster.

Women have not been excluded from the role of Town Crier. In Northwich in the 1790s records show that a woman had been carrying out the role ‘audably and laudably’ for over 20 years.

The key requirements of the role were literacy, a loud voice, and an air of authority. The town crier was often also required to act as a law enforcement officer in an era before the invention of the regular police force.

Just like most other towns, both Windsor and Maidenhead had Town Criers in the past. Windsor is last recorded as having a crier in 1892. Maidenhead’s last crier before me was Mark James Taylor who hung up his bell in around 1910.

Town Criers in the Royal Borough of Windsor and Maidenhead

In his 1862 book “Windsor: A History and Description of the Castle and the Town” the author  John Stoughton reports that in the later 17th Century the Crier was paid 2 shillings by the corporation of Windsor for reminding the populace not to let hogs loose in the high street.

However, the crier was not always so well paid. The chamberlain’s accounts for 1682 show ten pence “to the cryer for crying the streets to be swept.” Even this was a raise compared to 1666 when Thomas Round was paid sixpence for “crying down the fayre”.

Other names of early criers are hard to come by

John Mandy and William Goring are both listed as being paid in 1675 to cry about the perennial pig problem.

But even when names are missing, accounts provide fascinating insights in to such details cryers tools of the trade. In the Chamberlains accounts for 1628 we read that sixpence was paid for ” a brassen tip for a staff given by Mr Martyn vicar and is to be used by the cryer of the town in his office.”  (Tighe and Davies – Annals of Windsor Volume 2 – page 94)

These days the Town Crier is strictly above politics, but it hasn’t always been the case. There is a story from the nineteenth century of a one legged political agent paying the Windsor Crier to bring a crowd together to watch the agent burn his wooden leg on a public fire. The day before he had painted his leg blue in support of Lord Wellesley political party. However he then went out and got drunk. Whilst sound asleep in the street some political opponents has repainted the wooden leg yellow. The man felt so offended by his now whigish leg that he insisted the only thing to do was to burn it to ashes.

Perhaps the crier alluded to was a Mr Grey, who we know held the role in 1828. He is recorded as bringing one Elizabeth Clarke, a common hawker before the Mayor for refusing to pay him one penny which he said was due to him. Ms Clarke asked the Mayor by what law she was bound to pay it and he explained:

“It is the criers fee and if he has hitherto neglected to collect it of you it has been either through inadvertence or favour. Common useage demands ‘That all persons hawking or carrying good, wares or commodities from house to house or in the street for sale are to pay one penny to the common crier of the borough according to common custom’. You must therefore, in common with others pay the customary fee before you can be discharged. The woman immediately pulled out her penny and departed with her packs”

SOURCE: Windsor and Eton Express Sat 6th September 1828.
The Post Office Directory of Berkshire lists a William Simms as Windsor’s crier in 1854. Interestingly he is listed among the council officers. In 1863 William Gibbons is Windsor’s Crier according to Dutton, Allen and Co’s Directory.

Mr Taylor – Maidenhead Town Crier in the early 20th Century.On 19th February 1851 the Maidenhead Crier is Mr Henry Sarney. We know this because at the opening of a public health inquiry at the Town hall, the proceedings began with Mr Sarney providing evidence to ‘prove that he had duly affixed notices of the public enquiry’.  This perhaps shows the changing nature of the  criers role. Rather than proving he has cried in the streets about the event it is the broadcasting of the written word (I.e. The posting of notices) that by the mid century is of paramount importance.

Sarney Williams is a name listed as Town Crier in  Maidenhead in 1853. however the Post Office Directory for the following year lists Henry Sarney of Braywick Road as Maidenhead Town Crier so Sarney Williams is more than likely William Sarney or indeed Henry Sarney! It is entirely possible that the current “Maidenhead crier’s bell” goes back as far as Sarney as the experts at the Whitechapel bell foundry supposed it could date from around 1850 onwards.

In Windsor the most recent references to a town crier date to 1891. According to Kelly’s Directory for that year, a George Gibbons was crier. He was born in 1842 and during the time he was Town crier was recorded as living at 28 Charles Street. He is recorded as crier in Kelly’s Directory of 1883 so held the role for at least eight years. I have been told that Windsor’s last crier retired in 1892. This would surely have still been George Gibbons, but have yet to find further details on this. I did however see a copy of the council ‘hall book’ where it appears that Mr Gibbons was not only the town crier but also the official bill poster. 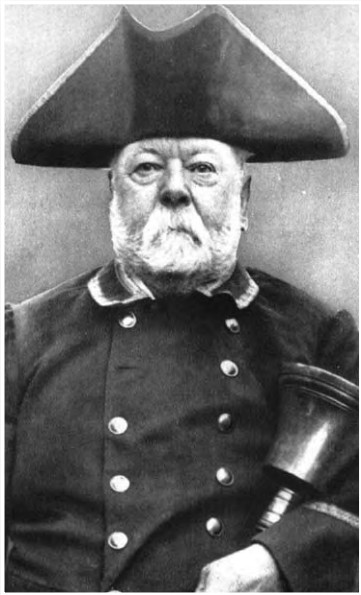 The council archives include a wonderful photo of Edwardian crier Mr Mark James Taylor in a very high brimmed dark coloured  tricorn hat with a contrasting edging, but no feathers or cockade visible. He is wearing a double breasted overcoat with a trimmed collar and wide turned back sleeves, again trimmed (although the trim is narrow). Mr Taylor was listed as living in York Road and had the roles of “Hall Keeper & Town Crier” according to Hunt’s Directory of 1910. He died in 1922 and for the next 90 years Maidenhead did not have an official Town Crier.

It is Mr Taylor’s bell that was very kindly donated back to the Council by a member of his family.  This is the ‘Maidenhead Bell’ which I use for making proclamations and cries around the Royal Borough. The ‘Windsor Bell’ is a new one, bought from the Whitechapel Bell Foundry in 2012.

In 2012 Councillor Alan Mellins proposed to the council that a new Town Crier for the Royal Borough of Windsor and Maidenhead be appointed.  It was agreed and “auditions” held for finding the new Crier.   Following a round of interviews and a public “cry off” (judged by the mayor and three future mayors along with a representative from BBC local radio), Windsor resident Chris Brown, was appointed to the new re-established role of official RBWM Town Crier in November 2012.