This weekend was something special. Nicola and I had spent last Wednesday learning some basic willow weaving as we helped finish off the coronation arches at the top of the long walk. This weekend we were invited to Saturday’s opening ceremony and I was asked to assist in the proceedings in my role as town crier. 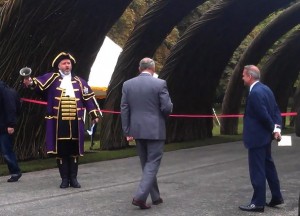 Lots of people turned up to hear Andrew Try, the chairman of the Royal Windsor Rose and Horticultural Society, explain the history behind the event before he welcomed gardener and T.V presenter Alan Titchmarsh to say a few words. Alan gave an impassioned speech about the importance of enthusing youngsters with a love of gardening and nature. It was a good speech and he delivered it without notes.  There were also songs from a quartet of singers and a good sized crowd had turned up despite the overcast day. 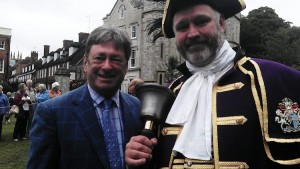 The arches themselves were built by a team of talented willow artists including Spencer Jenkins and volunteers from the local area and further afield. Some came from as far away as Wales to help build the arches.

I was then asked to ring my bell and loudly invite the dignitaries (Air Marshall Ian Macfadyen, Constable and Governor of Windsor Castle and  Jeffrey Branch, Deputy Lord Lieutenant of Berkshire) to cut ribbons at both ends of the arch, officially opening the event. 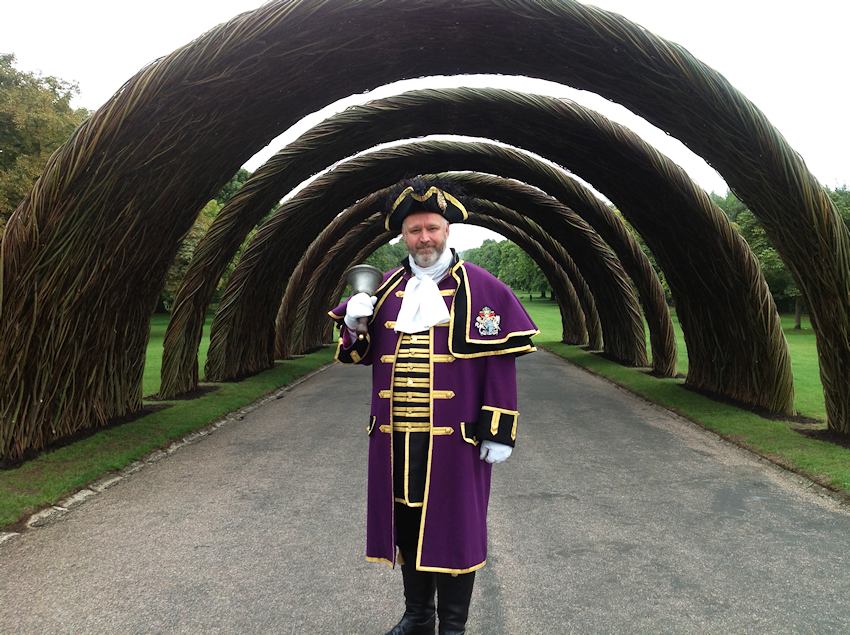 Nicola got the opportunity of a quick chat with Alan Titchmarsh who remembered working with Nicola’s dad some years ago. Alan described me as ‘Stentorian’ which for a town crier is about the best compliment you can get and shows that as well as knowing about long borders and mulching, Alan is also a bit of Greek classicist on the side. Naturally we got some pics of us standing there next to the star guest with silly grins on our faces.

Once out of uniform Nicola and I went for a walk in the park. From the Snow Hill end of the long walk, the arches, that seem so imposing when seen from Park Street, were almost invisible.

Then on Sunday it was an early start for me, off to Maidenhead to help with ceremonial duties for the Battle of Britain Memorial Civic Service and wreath laying.  This was my first such civic ceremony and leading the Mayor and Councillors in full dress down the middle of the street toward a service at St Mary’s church was quite an experience.  The sermon from Will Stileman was about being wise under pressure was timely, what with the Home Secretary Theresa May attending the church service; as were the local Air Cadets and a good number of RAF veterans.

I have often wondered how solemn events such as wreath laying ceremonies work so smoothly, and on this day I found out.  In our case it was because a great number of people in plain suits all know exactly what the order of ceremony should be and are efficiently whispering instructions to the rest of us. Particular thanks to Dean and Andrew for lots of “chris, slow down… left a bit… stop there…three paces forward…” etc.  As both my Dad and Grandad had served in the RAF I felt particularly pleased to have been asked to attend and be part of this event.

However being Town Crier in the Royal Borough isn’t just a weekend job. On Tuesday I will be outside the Guildhall in Windsor announcing the winners of the council’s ‘Bright Ideas’ challenge (and hoping to meet TV legend Michael Parkinson). Then on Friday I am helping out at the Mayoress Julia Jenner’s Charity Coffee Morning. That same evening I need to be back in Windsor for the launch of the Fringe Festival and then it is the weekend again with yet more events to attend as town crier. On Saturday morning I will be in Peascod Street for a Fringe Festival event and then off to make an appearance at Clewer Green Infants School.