I was kindly invited to lead the procession at the Sunninghill Street fayre on Sunday 17th November.

This weekend was the first outing for the new hat, and I am really pleased with the result. Doug at Ascot Top Hats has been spending most of the summer experimenting with bits of fabric and leather in his quest to construct the ‘ultimate tricorn hat’ and I think he may have succeeded.

It is incredibly comfortable to wear, being perfectly sized and steamed to fit my head shape. Doug used the best quality felt and once he had the shape right, he lacquered the bowl by hand to add rigidity. He also added secret air vents to help me keep a cool head.

Then he steamed and lifted the three sides, sewing them in place with small leather thongs in a cross hatch pattern (to add a bit of piratical panache).

Then there was the decoration. A gold ‘lace’ beautifully tacked with tiny stitches around the brim and a huge plume of ostrich feathers. The small decorative cockade is based on drawings Doug dug up from an old book of military insignia. He adjusted the design and then got tools made up especially to press the leather into the desired shape. Next he added a lion’s head to reflect the lion’s head on the Royal Borough’s coat of arms. The actual lion’s head Doug used was the same design as one that was once part of a policeman’s uniform. I was particularly please with this as it serves as a nod to my dad’s side of the family, one of whom was a policeman in the Victorian era.

Behind the cockade, swan feathers and horse hairs are there to mirror the supporting heraldic animals on the borough’s crest. The feathers were collected (with permission) from Baths Island in Windsor and the short horsehair was painlessly clipped from the mane of a beautiful local white horse.  It really is a wonderful hat and Doug’s commitment  and professionalism are a credit to the borough. 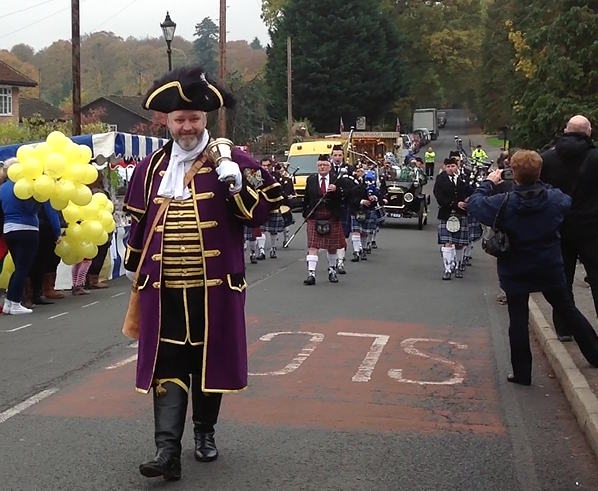 So naturally enough when I stepped out onto Sunninghill High Street with my new hat, I was grinning from ear to ear. The people were all very friendly and the route was a nice easy straight line, so there was no chance of getting lost. I walked up the street with a really impressive Scots marching band and the cast of Wind in the Willows in Mr Toad’s Model T Ford bringing up the rear. 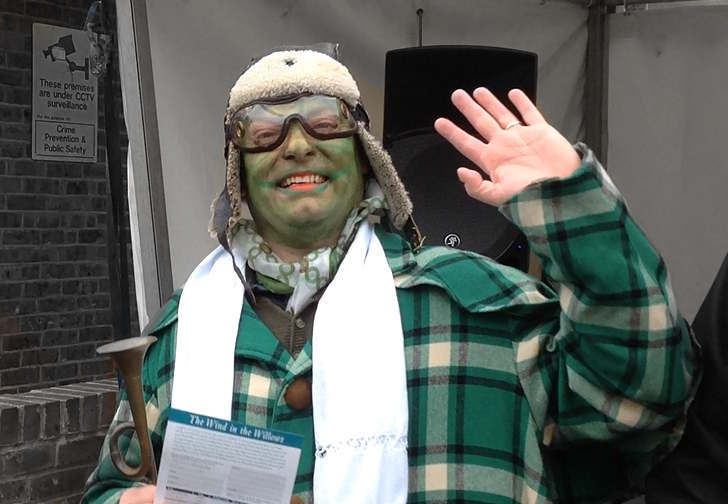 Once we stopped and the band marched off, Mr Toad and Badger chatted to the audience while the local children awaited the arrival of the true star of the afternoon, Father Christmas. He had given the reindeer the day off and so had borrowed Mr Toad’s car for the afternoon instead. 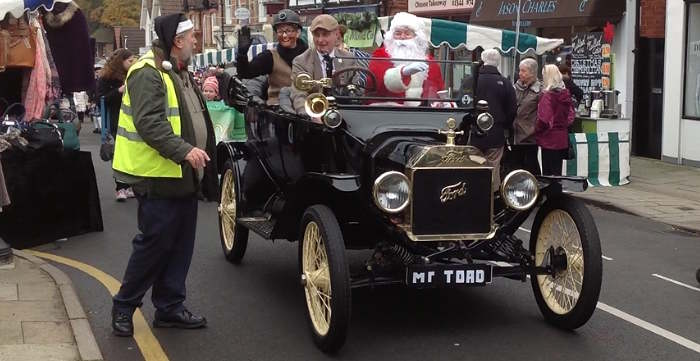 Sunninghill has a smashing village atmosphere and a lot of time and effort had been put in by local people to ensure the event was a success.

It was lovely to have so many strangers congratulate me on the recent win at Hastings and nice to see so many familiar faces too. We had a lovely time in Sunninghill and hope to be invited again next year. 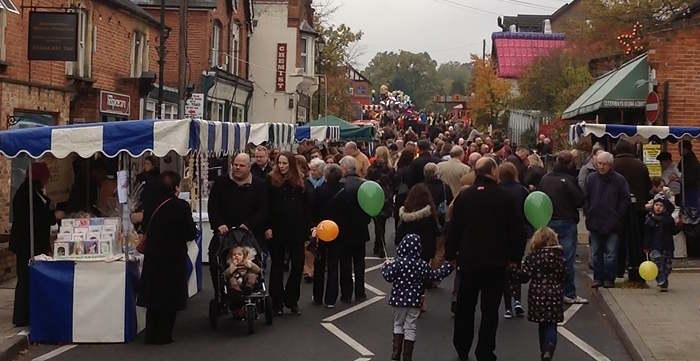