Went to London to get the town crier’s bell’s wobbly handle fixed. Whitechapel Bell Foundry (established 1440) have the actual wooden former they used to create ‘Big Ben’ 150 years ago, framing the inside of their front door. Also picked up a new shiny bell. 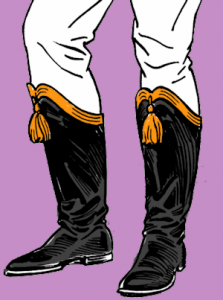 Then it was off to Edmonton to get measured for boots.

I was warned that pirate boots might look ‘a bit pantomime’ by a man who then suggested I go for boots with gold tassels instead! Yet another conversation I could never have predicted having  just a few months ago.

So, gold tassels it is. Hessian Boots are authentic period boots to go with the late eighteenth century theme of the livery, and the fact they originally came from a region of Germany is a nice nod to my part-German ancestry.